Why Digital Nomadism Is Perfect For Gen Z

Just in time for the birth of a bold, tech-savvy generation who would leave marketers shaking in their boots with their 3-second attention spans, the term “digital nomad” was coined in the late ’90s to define remote workers who leverage technology to become location independent.

The values and characteristics of Generation Z clash with many aspects of the American Dream. And with the digital nomad lifestyle increasing in popularity, the next American tradition on the chopping block could be the 9-5 office job. Gen Z has just begun to enter the workforce, infusing fresh ideas and perspectives into corporate settings. But if I had to bet money, I don’t think they’re going to stick around through the next decade.

The COVID-19 pandemic has advanced the remote work revolution years into the future, with companies finally realizing the potential for increased productivity and job satisfaction, and those employees who are stuck at homes finally getting the time to learn new skills and pick up side gigs.

But even before working from home became the norm this year, it was already estimated that the digital nomad community will reach 1 billion members by 2035. By taking a deeper look at the trademark characteristics of Generation Z, you’ll begin to see how all the stars are aligning for a post-pandemic boom of the digital nomad lifestyle.

Here’s the thing about Gen Z. If they don’t know something, they can and will learn it online, probably on YouTube and with very little assistance from parents or educational institutions.

And that’s one huge reason why digital nomadism just makes sense for this generation. In school, we learn how to be good employees. But not how to freelance, own a business, or build passive income. There are some digital nomads out there who have degrees in their field and are doing exactly what they set out to when they started school. But the vast majority of nomads had to learn as they went, signing up for Skillshare courses and following YouTubers, and completing online marketing certifications. This new generation has the opportunity to not only teach themselves the tried and true methods of earning money online, but to invent their own roles and ways of earning a living that may not even exist right now.

…And Soon They’ll Be Self-Employed.

Gen Z is an entrepreneurial generation. They’re financially focused, but ultimately they want to work for themselves. A 2019 Upwork study found that among the 57 million Americans who identify as freelancers, 53% of them are Gen Z workers. And with the majority of Gen Z wanting to be their own boss or launch their own company one day, we’re going to see a record number of self-made entrepreneurs from this era.

They Celebrate (And Require) Globalization And Diversity.

Gen Z is the most diverse generation yet, and one of the first “global” generations in the wake of the digital age. As the online world evolves, the global generation will continue to become more interconnected with each other. Even today, most adults agree that their kids already “have more in common with their global peers than they do with adults in their own country”.

Gen Z is ready to become a generation of global citizens because to them, it feels like they already are. In this era, diversity is expected, embraced, and celebrated like it’s never been before. Diversity is no longer a collective desire, or an objective to work towards. It’s a requirement.

They Want To Live An Extraordinary Life.

If you’ve never heard the “You have to start romanticizing your life” monologue, you’ve probably never spent more than 5 minutes on TikTok. Though at this point it’s become a bit of a meme, Gen Z still deeply believes in romanticizing and falling in love with every aspect of your life. Creating a life where you’re living to your fullest, crushing your goals while surrounded by beautiful aesthetics—their desires are perfectly in line with what the digital nomad lifestyle is all about. The freedom to move around to different countries and do what you love is enough to make Gen Z finally feel like they’re the main character of their own lives.

They’re More Independent Than Past Generations.

This age group is all about opting to do their own research rather than rely on others’ thoughts. They’re maturing and growing up faster, not needing to ask their parents as much as previous generations may have. Good or bad, the internet has made this generation insanely independent. Independent enough to sell their stuff and book a one-way ticket to a foreign country.

Gen Z can smell B.S. from a mile away. Their collective focus on authenticity clashes hard with sterilized, surface-level corporate settings. Instead, this generation yearns to create something real and new.

I mean, duh. But seriously, if Millenials learned best practices for remote work the hard way, Gen Z’s intense familiarity with technology could mean that most will just intuitively know how to work remotely.

They Want To Be Heard.

With so many young content creators on every platform, there’s a whole new field open to digital nomadism. And this generation is ready to use their voices for content creation on blogs, YouTube, TikTok, Medium, etc. as a source of income online.

They’re Ready To Change The World.

We all know the 40 hour work week sucks. So why has it stuck around for so long?

Gen Z is a generation of activists: educated, bold, unabashed. While previous generations may have dreamt of escaping the soul-sucking 9-5, this could be the era where it finally ends. And Gen Z, not seasoned digital nomad Millenials, will likely be the ones leading that charge.

This year, the COVID-19 pandemic has resulted in even the youngest among Gen Z completing the third grade from behind a screen at home. They’re already learning from a young age that most work can be done from anywhere with a WiFi signal.

So today, the 9-5 reigns supreme. But tomorrow, when this self-educated, tech-savvy, diverse, independent, activist generation enters the workforce in full force, that could finally change. 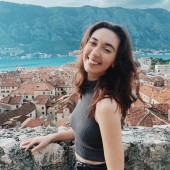 At 24, Claudia pulled up her deep, overgrown American roots and opted to become a citizen of the world instead. Today she's a remote copywriter, travel blogger, and digital nomad. Through her writing, she helps aspiring digital nomads finally start living as their true, travel nerd selves by ditching the 9-5 for a life of adventure.

This site uses Akismet to reduce spam. Learn how your comment data is processed.